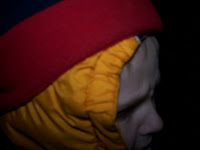 Sensory needs and issues are big with our little ones with Autism. Things that would barely bother us can be extremely distracting, soothing, hurtful, or helpful to children with Autism. While we didn't understand Sam's sensory issues early in life, we quickly learned more and understood them after finally getting the Autism diagnosis.

So, to include Sam in everything we do, means we always need to have a "plan B". We are not being mean by taking Sam to most everything with us, even if we know he will not be able to stay or attend the event. We are simply trying to help him experience all of life that he feels comfortable doing.

Until about 6 months ago, Sam hated indoor playgrounds like the McDonald's Playplace, or for us, our hometown Maple Maze as I wrote about in a previous post. If I would not have made him go once a week for the last year, to expose him, and to encourage him a step closer each time, we would never be able to see the smile and excitement that he now has for playing at them. And, for children with Autism, exactly what they need, the opportunity for casual interactions with peers. As my friend at Autism-schmatism has shared, you keep trying.

Our intentions were good. We still wanted to include Sam, as the one thing we are still determined to do, is be family. To do everything we can together, but just in a different way sometimes.
So we tried....
Plan A- We loaded up the car to go downtown before Christmas Eve. It was the last night of the Holidazzle Parade. We had not been to it for almost 4 years, and Sam had never gone. We thought we would make a night of it. We would first go to the Macy's display, where they have 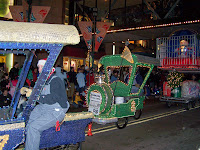 an animated holiday display every year on the 8th floor of the downtown Minneapolis Macy's store. As we trekked all the way up to the 8th floor, we soon found out the line was an hour and a half wait. Sam was already twirling and pulling away, wanting to run. Plan B is now implemented. We would go back down to skywalk level, eat supper at dad's favorite, Potbelly's, then go and find a good curb spot for the last night of the parade.

Should have known that things would need to switch to a Plan C while eating, or not eating in Sam's case. Lot's of people busy getting last minute gifts. Potbelly's is all glass, facing into the IDS Tower, the tallest building in Minneapolis and a center for activity, especially before the parade. Brent and Zach sat at a differnt table than us, as Sam was angry and had ran and head butted Zach in the back for no reason. Zach was hurt so bad he was crying. I took Sam to eat at a table where he could not see Zach, as poor Zach was his target, and Sam just wanted to kick and scream at him.

Sam was back to no words, just growling and screaming. He pushed away (onto the floor), each food I tried to give him. He finally ate two pretzals, and drank two sips of pop and done. Plan C started. I told Brent to have him and Zach to finish and then meet us on the plaza level, as I would walk with Sam and let him watch the water and people. We walked and walked.

Brent and Zach joined us. Sam seemed to be smiling and was excited about going out to the street to prepare for the parade. We made our way down a few blocks to finally find a curb spot. It wasn't too cold for a Minnesota evening. We thought we had settled in for our short wait. Sam continued to have a hard time staying still, and the crowds were starting to thicken along the route, making it even harder for the little guy. Plan D- Brent took Sam for a walk until it started.

As the parade got closer, Zach was full of excitement. He had started to remember a little what it was like. It is similar to the "Electro/Lights" parade at the Magic Kindgom. Every person and float is solid lights in the parade. As the parade got closer, Sam got more uncomfortable. After the first float, full of lights and music came by, Sam was done. The sounds, the lights, the thousands of people were too much for our little guy.

Plan E- I take Sam back through the skywalks to the parking garage until it was over. The walk back included two scenes of him just stopping and deciding to lay flat on his back. He is not screaming or tantruming when he does this, he just lays there and looks straight up. He does this every once in awhile when we are out. I have gotten so used to it, that I just kneel beside him and talk to him until he gives me that look like he is ready to go. To others it can look like he is having a tantrum or is hurt. It is always interesting to watch how people react. React, but not respond.

Plan F is for Brent and I. It is our plan, that even though these outings can be exhausting for us, and it doesn't always go as planned, that our final plan is that we will continue to keep Sam a part of our world, while respecting his.

A Twist of Faith
Things in our life never go as planned. We have disappointments and celebrations. Often times these things occur when we least expect them. The one thing that is for sure, is that we can trust God to lay out His master plan for us, and that no matter how we journey down that path, He is always there, even during the "plan B's".

It was because the Lord loved you and kept the oath that he swore to your ancestors, that the Lord has brought you out with a mighty hand, and redeemed you from the house of slavery, from the hand of Pharaoh king of Egypt. Know therefore that the Lord your God is God, the faithful God who maintains covenant loyalty with those who love him and keep his commandments, to a thousand generations... ~Deuteronomy 7: 8-9 (NRSV)
Posted by mysamiam at 7:23 AM

And all the way to Plan Z----the main thing is, you all got through it and home----merry merry Christmas!

I love reading your "a twist of faith." These give me an inner peace and give me strength.
Merry Christmas to you and your family. Hope Sam's arm is feeling better, we always pray for his arm at night. I told Big Brother and showed him Sam's picture with Santa and his hurt arm. He said, "we should pray his arm heals fast Mom." I said, "great idea!" Thanks for the mention in your post:)

KC's Mommy, thanks for the sweet prayers from Big Brother. Brought tears to my eyes picturing him. Kind words come after a tough day for little Sam. Peace and strength to you always:) !

Happy New Year! Griffin lays on his back like Sam does on the ground and just looks up at me. I think that he does it when he wants to just shut down and feels overwhelmed or maybe it's because he just doesn't want to do something. Who knows? I have tried talking to him and trying to get him up but it doesn't seem to work, he just gets up when he decides that it's time. I'm glad that you have found a way to help Sam when he does that. It is interesting how people react when they see our kiddos doing such things, I have learned to tune them out and not worry about what they think which is what seems like you are doing. Have a safe and happy holiday.

i love your synopsis of what you will continue to do with and for your wonderful family.

sending the very best to all of you! happy new year!!