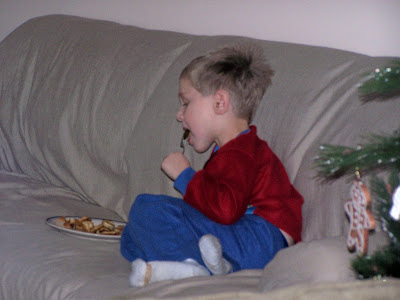 He found a new place, and I wonder if it will stick.

Living with a child with Autism finds a family learning to adjust to (and many times prevent) routines. Routines are not bad for children with Autism, as it really is a means to keep their world stable and predictable which is important for them. Here is a piece written on an Autism Association site from Austrailia that explains it:
People with autism often insist on following routines or rituals, and can be distressed over changes to small details of the environment, such as wanting to keep to the same route to the shops or eat dinner from the same plate. They may strongly resist attempts to redirect them from these behaviours or to change their routines. It is thought that people with autism feel tremendous anxiety at the unpredictability of daily life, and these rituals and routines remove some of the uncertainty for them about what will happen next.

Routines can only be a challenge when they effect the whole family, which can be frequently, so I have learned to pick those battles and let the other times fall to the side, both for Sam's sake and ours.

So, yes, he found a new place.

Sam has a rigid lunch routine on school days, as I have said before. Coat off, up steps, sit at table with plate of pancakes already prepared (thank goodness for Pillsbury Whole Grain), eat, wash face and hands, done! Of course this routine started by me having his lunch ready one day a year ago, and then it has to be the same. Yes, at lunch, I have given up on variety...pancakes every day is his need or look out. We take advantage of him knowing that supper is the time the food changes.

Yesterday, I broke the routine and now am going to pay for it. It was a rainy, drizzly day. I was trying to finish Christmas cards and had a place set up in the basement on the couch. I thought it would be fun to have Sam eat lunch on a TV tray down there with me by the fireplace, and then thought we could snuggle and take a little nap together before heading out to speech therapy. Well, the plan worked great. He loved being downstairs with mom and eating on the TV tray. We have also made it clear to the boys in the past, that we only eat on the TV trays for special times. So, I told Sam that it was a special time.

Today...lunch time. Ooooooops! I knew it might come back to haunt me and did it ever. I made lunch for Sam and I (no, I do not do daily doses of pancakes, just the lad) and placed it on the table. He did not have school today, so normally the lunch routine is really only eating pancakes. He would have no such thing as eating at the table with mom. He was going to eat downstairs with a TV tray. A huge tantrum that included kicking me and throwing things ensued. I had time today to deal with the tantrum for however long it took, as we didn't have therapy today. I really felt like I had to fight this one, otherwise, he will eat down there for every meal, knowing how he sticks to routines once introduced or changed. After I got him calmed down, I let him lay on a kitchen rug, which is what he likes to do when he needs to calm down. I turned around to finish preparing my lunch (his was already on the table). When turning back around, I saw it was gone, and so was he. I thought, rrrrggggggggg, he went downstairs. He did not. He went to the couch in the next room (which is normally a big no, no) and was actually laying on his side with his head down on the couch eating. I walked in the room to tell him to sit up so he wouldn't choke, but of course did not need to, as he growled at my presence and sat up, as if to bark me away. I smiled, and I think he kind of wanted to smile back, but didn't. I decided it wasn't a battle worth diving into today. We have a busy night planned running brother around to piano and youth group, so I decided that his routines were going to be broken enough today. Let it rest.
My only concern about this lunch routine...is this a new place to eat?
A Twist of Faith
I am a proud member of the Disciples of Christ. We practice communion every Sunday welcoming everyone to Christ's table. Some people say, "Doesn't communion become routine and lose meaning when you do it every Sunday?" I always respond with no. I can hardly wait for the chance. It may look like the same communion table each week, but it is always a different reason and a new chance for forgiveness and newness. It is always a new place to eat.
While they were eating, Jesus took a loaf of bread, and after blessing it he broke it, gave it to the disciples, and said, “Take, eat; this is my body.” Then he took a cup, and after giving thanks he gave it to them, saying, “Drink from it, all of you; for this is my blood of the covenant, which is poured out for many for the forgiveness of sins. I tell you, I will never again drink of this fruit of the vine until that day when I drink it new with you in my Father’s kingdom.” ~ Matthew 26: 17-30
Posted by mysamiam at 12:22 PM

What always amazes me, too, is how just doing something once will result in Charlie deciding "and so it shall be." We had one of these things happen today...

I'm glad someone else has a growler [but not a dog] you've restored my sanity for a little longer. Cheers