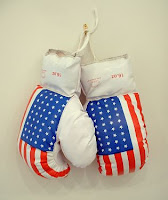 The Combating Autism Act finally passed today in the House.

The Autism Society of America sent this brief summary of the Act to its members in an e-mail today:
S. 843, authored by Sens. Santorum and Dodd, first passed in the Senate on August 3, 2006. The legislation contains many important provisions to strengthen autism research and diagnostics, including a renewed investment to track the incidence and prevalence of autism spectrum disorder; to increase public awareness of early identification; promote the use of evidence-based interventions for those at higher risk for autism; and establish state-level clearinghouses for information on autism. For the first time, this legislation also calls for culturally competent information on autism.

There has been lots of discussion in the autism community about this act, especially since it uses the word combating. It makes it sound like our children are so horrible with it and we must defeat it. I too am offended by the word "combating" in the Act, but I am not offended about what the Act may mean down the road. I did spend time this summer and fall contacting my senators to encourage support of it. It might help families "combat" insurance companies!

I post this today, after two long, frustrating days with our insurance. Rrrrggggggggg! We have been dealing with coverage for Sam since the get go. I am beyond frustrated with them and will vent here (sorry)!!!!! I can't really go into much detail, other than say they will cover some things and then they don't. They (our insurance) say they view autism as not having proof or evidence of therapies that will help as there is no cure. They also say that ABA therapy has some research in support of but not enough science based proof of helping. We feel stuck sometimes with few options for Sam, and stuck with lots of bills (but all worth it for him)
...but my point is this. In all of the conversations I have had with insurance over the last couple years, it is very evident that they don't want to cover anything that is not evidence based. Maybe with the new Act, there will be dollars to back up such research.
My experience in the state of Minnesota has been that families in the middle get stuck when it comes to services for Autism. If you are very wealthy, you can afford the extra services from PCA's to ABA, or if you have a lower income and can qualify for Medical assistance, they cover everything, but if you are middle income, you can't even afford TEFRA (at least not here).
I just want families with children with Autism to have a better means of accessing services. My hope and prayer is that this Act will increase awareness and research and services. And no, I don't want to combat Autism, I want to combat the insurance companies. So, forgive the name of the Act, but hope for better resources for our children from this.

Perhaps we can look at this Act not as "combating Autism", but fighting the good fight that will serve the highest good for all families with Autism.
Posted by mysamiam at 1:45 PM

Now you'll have to tell me where you found the gloves! [not for the boys, it's their sister who wants to take up boxing - I wonder why that would be?] Cheers

Mcewen, Sorry, they aren't mine, just a pic I had. I say "You Go girl!" on the boxing. I am the only female surrounded by 3 males. I am afraid wrestling will lead to boxing someday!!!!

And you're fighting the good (and the right) fight, right here...... I tend to get caught up in rhetoric and semantics and always have to remind myself to lok at the essentials. Thanks for this.

ABA for K.C. is very very expensive. Even a tiny bit of help from the insurance companies would make a huge difference.

"but my point is this. In all of the conversations I have had with insurance over the last couple years, it is very evident that they don't want to cover anything that is not evidence based. Maybe with the new Act, there will be dollars to back up such research."

I feel like I am living this right now.

Kristina,
I do want it to be a good fight, but I hope I don't get ugly, because I am super sick of being stuck in the middle financially in helping Sam. Thanks for your great discussions on AutismVox.

KC's Mommy,
I hear ya. Let's keep our fingrers crossed on good research and support from CAA!