It's the little things...like his finally letting me complete the home therapy part of his speech this week without major distractions and tantrum's. The bad part of his rigid routine's, is that once something has been done a ce 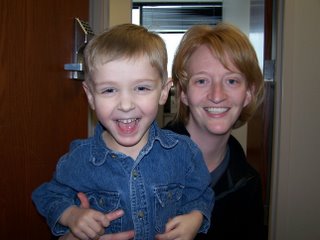 rtain way with a certain person, he doesn't let it happen. In the past, it is hard to complete tasks like the home speech work. Sam will scream and push me away any time I start to work with his picture cards or words and will say "NO words, Ratel words." (Ratel for Rachel). Or when I correct him the way Rachel (private SLP, above in pic) does in her sessions (because he understands that way best), he gets very angry and will even hit sometimes saying "oty Ratel" (only Rachel). Or he'll sometimes say "word teater!" (word teacher, Rachel), meaning only she can teach him this. Well this week he FINALLY let me and accepted his rewards for completing his task! Usually, anymore, we can't even reward with typical treats or anything, so I have figured out to actually wait until he has started a task he wants to do and then interrupt by using the "First this, then that" trick. It's the little things...that make life so great!

It's the little things...like him finding a friend to play with at the part (oh my gosh, I meant to type park, but that is how Sam would say it, how funny, how I start typing like he talks!) yesterday! We try to take him to lots of places a week where he will be forced to socialize with others and to force him to handle the loudness and business that can sometimes overwhelm him. He has not been a fan of indoor playgrounds like our towns Maple Maze or New Brighten's Eagle's Nest or any McDonalds Playplace. It usually makes me sad to watch him at these places, as he will either cling to me or stay very close and often times cover his ears. I will literally try to push him up in or encourage him to talk to someone. He will also just hang around the entrance of the gym set and just watch others going in forever.

This weekend was great though, Brent and I took the boys to Edinborough Park in Edina. It was only Sam's second time there. He went off right away and came back first with a friend before his very social, 8 1/2 year old brother. Sam was so excited. He brought his friend to us. Granted, it was a younger child, who would do and go wherever Sam told him, but we were so happy it brought tears to my eyes (if Brent wasn't a guy he would have said the same :). It's the little things...that make life so great!

It's the little things...like the fact that he is finally getting sleep and doing so much better at school. I have been reluctant in the past to post it, but yes, Sam is on meds for sleeping at night. While the "biomed/alternative med only" group will "post me" now, I am not afraid to say how much we trust our medical community. And, while others will "ooooooo, they are doing meds......", I would rather do something tested than "stuff" that has no FDA approval or doctor approval. He is functioning much better than before. While not perfect, and never will anyone be perfect, it has been great. He will focus more for us at home, perhaps the whole reason he will sit better to do the home therapy stuff, and follows us better. We all need our sleep. Now that mom is finally getting more sleep too, we are all much better for it. It's the little things in LIFE that can make it so GREAT!
Posted by mysamiam at 1:54 AM