Ufta, Saliva...and I am not even Norwegian. But truly, yesterday was an "ufta" day. Sam had one of the most challenging days he has had in a long time. Oh, and saliva was a big part of the day. So, if you have a weak stomach, don't read on.

The day started like any other school day, except he had a hard night sleeping, which might account for the crazy day. His meds have been working so well, I am really hoping it was just a glitch.

Transitions were a little more difficult getting clothes on and ready for school. Eating is always an issue, but I don't recall that he ate any more or less than he usually does. He definitly did not want to get on the bus. And to top it off, he had a substitute bus driver, which could have added to the day.

After he gets off the bus each day, he has his little routine. It is actually very cute to watch. It usually takes us awhile to get into the house, as he spots every new leaf, seed or rock that lands on the driveway. He always insists on picking up each one. We finally get to the front door, he rips off his coat and shoes and runs up the steps to see what I have on the table for lunch. Same routine every day. But........today, I knew we were in trouble when he got in the door, and instead of him taking off his coat, he looks at me and screams "OFF!!!". Saliva is drooling out like crazy. He is slobbering all the way down his coat, which now is as shiny as a tire rim. When his drooling is worse, it usually means something is going on. Sometimes he is sick, sometimes he is tired. We just never know. I calmly say to Sam, "Use your words. What off?" Even though I know it is his coat. "MY TOAT OFF!". I again respond with a calm voice, saying "please?". Knowing that to ask him to try to take it off first as usual, was out of the question today. "PEASE!" he yells.

So, we get done with the coat ordeal. Now he starts throwing his body and legs all over the foyer. It is obvious that he is trying to take his shoes off by standing up and not using his hands. He is screaming and throwing himself all over. I again say in a quiet voice, "Sam, mom help with shoes?" He shakes his little head yes, but he has tears in his eyes and he looks exhausted by now. I know he is a big boy and 4, but I can't help but sweep him up in my arms and carry him upstairs to the table to eat. He lays his little head on my shoulder and snuggles in for the short ride.

I always have his lunch ready, as his bus gets back from school well after 12 noon and he should be hungry (but never is). Eating has become a whole other issue, perhaps worth a blog later. We get to the table and of course he starts screaming. He is not happy with the turkey and green beans he sees. Our typical song and dance at the table has begun. I try to trick him, convince him, encourage him to at least sit down (a rarity). I tell him he has to have four bites of turkey and count them out to a single place where he can see them. He takes the meat and throws it at me and the floor (Chicago, our dog, is in heaven, and hmmmm.......no wonder she was 3 pounds heavier at her appointment this week). Sam continues to stand up on the chair screaming "ALL DONE". I tell him "sit down". "4 bites" yada yada yada.......the dance would continue forever. He finally puts a bite of turkey in his mouth (which he has liked before), but opens his mouth and lets it all fall out, chewed up and all.

Needless to say, the rest of the day was similar. Little use of his words, nor were they appropriate when he did. He would ask for water or other drinks throughout the day, but when you gave it to him, he would take a drink, open his mouth and let it fall down him to the floor, then laugh.

He spent a great part of the day running his fingers over everything and knocking everything on the floor. He has always been very tactile, needing to touch all that he sees. When he stands next to me, he always pushes into me touching my arm and feeling my hands. Wherever he goes he needs to touch and run his fingers over the object or person. Today was just one of those days that put me over the edge.

It seemed he was doing lots of sensory seeking things today. So, I even did some brus 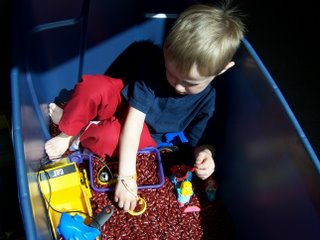 hing therapy, did the old joint compressions, wrapped him tight in a blanket, and made him sit in his "bean tub" for some time (which usually calms him).

Then it came time to pick up his brother from school. I showed Sam his schedule so he could visually prepare. Gave him lots of warning. Used our cool timer (the Time Tracker by Learning Resources) so he could mentally prepare, and bam! Major melt down when it was time to pick up Zach. I can usually spare a couple minutes, but today was rainy, and I knew that faithful Zach would be in the same, unprotected by the elements spot, he usually is. While Sam is screaming, I resort to picking him up and putting him in the van while he is kicking, clawing and hitting me.

While being a stay at home mom now, after 15 years of teaching , I have finally begun to adjust. The one area I am not adjusting is the parent pick up/drop off scene. I don't really fit in. We only live 3 blocks from school. All the neighborhood parents, especially this time of year, walk together to pick up the kids. Every day I drive by, and they just look at me. I am sure they think I am stuck up or lazy. It is too hard to try to explain to them that walking with Sam is too hard. That it is much easier, no matter what his mood, to put him in the van and buckle him into his booster seat. Instead I feel like the fat, lazy loser who doesn't want to walk. Are you kidding? I love our Burley trailer/stroller, I love walking our dog Chicago with us. It just comes down to the fact that when I have to be somewhere by a certain time, that a lot of the time, no matter how I prepare Sam, it is usually a battle.

Needless to say, Zach was a saint and so patient with his brother. More so than his mother. Sam continued to refuse to use many appropriate words and screamed the rest of the day. He insisted on putting everything in his mouth, licking almost everything and spitting everywhere for no reason (it appeared, we know otherwise, in his little mind, he was trying to tell us something). Supper was chaos, bedtime was nuts, and all I have to say is....."Ufta, saliva!" Too much for me today :) Smile, there is tomorrow!!!!!!!!!!!
Posted by mysamiam at 9:56 PM