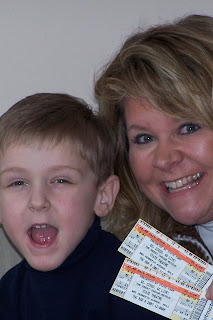 ...thump the person behind you. Forgive me, but that is what I felt like doing today but knew better not to. Why? I will fill you in on that later.

Because the best part of today was the dream date I had with someone I love dearly. Sam. We had two tickets to the tour of "Go Diego Go Live". We have had them for awhile and have been counting down. The performance was in the Hennepin Theatre District in downtown Minneapolis, at the beautiful State Theatre, shown below. We were only a few rows from the stage. It was awesome. Sam was super happy. He has two extreme's of happiness that one must know about him. One is the "super silly, spinning around, smiling, laughing, can't stop moving" happiness. The other is the "this is serious, don't talk to me, don't touch me, don't sing to me, just let me be to enjoy this" happiness. Both of them are as equally happy times for him, of that only a mother can know. 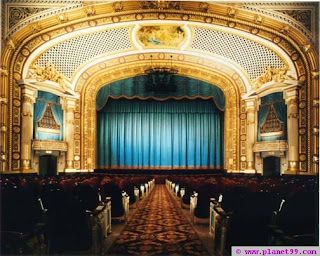 So, the usher gets us to our seats, I just sit down, and there is a tap from a father behind me, "Mam, could you please change seats with your son so my daughter can see?" I quickly nod my head and exchange seats with Sam. I place my hands under his arms to lift him so that it will be smooth and quick, but Sam doesn't want to move from his seat. I turn back to the gentleman and tell him that it may take awhile to get him to move, that I would try again in a little bit. Under his breath I heard him say, "and who is the parent here?" I chose to wait before trying again, because I do have a little experience with my son, and while yes, I am the parent, I don't think the man behind me would like to hear the shrilling "noooooooooooooo" that would emerge, as well as some jostling of the body parts from a meltdown, that could result in elbows reaching the row behind us where he sits. (Editors note: however, even though we are a week into Risperdal, and things have been great, I didn't want to test the waters.) 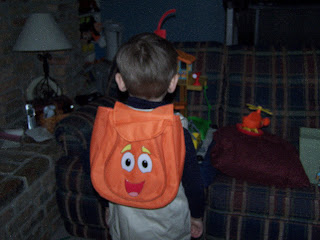 I let Sam sit, for a few more minutes. I thought if I asked him if we could take his coat off, that it might losen him up a bit. He firmly told me no "toat on". Now, if you didn't know Sam, and you looked at him compared to every other kid in that theatre, you would have thought there was something different about him, but in my eyes, it was just his different way of thinking. I knew exactly what he was thinking. He had looked forward to this day for a long time. He was so excited. He was enjoying it and taking it all in. The lights that pulsated around him. The familiar music pounding from the speakers on stage. The fuzzy seat that rocked up and down. He was "seriously" enjoying it, even though his face seemed intense. Okay, so back to the changing of the seats saga. I found my moment to slide him over to my seat with ease, at which point he finally agreed to take his coat off very slowly. I refused to look at the row behind us to acknowledge our compliance. 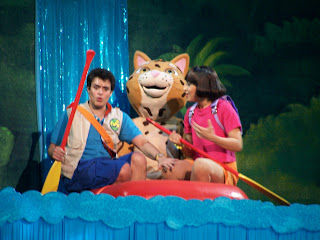 As the show continued, parents and kids were up singing and dancing together. Parents singing the Diego theme songs, smiling with their youngster. Sam didn't want me to smile today. He made that very clear every time I tried to look at him. So I didn't push it. I just watched him when he didn't think I was looking. He remained in his seat, just watching all the motion around him, but you could tell that he was just taking it all in the way he wanted to. While those that know me, know that I don't just like to sit, and that I too would have rather been up singing, acting silly and having fun. This little ol'e elementary teacher knows how to act silly with the best of them. But I needed to be what Sam wanted on his special day. I was just fine, until...

...intermission...and the wonderful gent sitting behind me just couldn't stop being "father of the year".
"Wow, you two sure know how to have a good time and live it up! He doesn't seem real happy to be here. " he said.
I replied, "On the contrary, he is delighted to be here. He is just taking every ounce of it in. That is how he enjoys himself. "
I turned back around and asked Sam if he wanted to go for a walk. Quick exit needed before I started talking snitty.

What has Sam taught me? I have mentioned before that he has taught me to better understand the diverse ways we think and communicate and to respect everyone's differences in regard to that. I have learned that Sam can be happy but look serious. I respect how he wanted to share the joy he had of seeing Diego today. So therefore, I must respect that "father of the year" just has not had the opportunity to experience many people in his life that are different than himself. And for that, it is not his fault that he doesn't understand my son nor me in our short encounter. I am not learning anything from Sam and his Autism, if I can't apply it in life. Dear "father of the year", I do commend you for being a dad, who took time to take his daughter to a great show, I commend you for wanting to live and enjoy life to its fullest, may you never lose that. And I, I will respect you for who you are and what you said, not what I would have preferred you to be or to have said.

A Twist of Faith
If you're happy and you know it...shake hands and make peace!!
Maintain good conduct among the Gentiles, so that in case they speak against you as wrongdoers, they may see your good deeds and glorify God on the day of visitation. 1 Peter 2.12
Posted by mysamiam at 4:49 PM

Wow. You handled that man a lot better than I would have. Kudos to you and Sam!

Nice blog, I like it :)
Keep it up.
acwo
http://tytka.blogspot.com

MOTHER OF MANY said...

I am amazed at your restraint, I am not so sure that I would have coped so well.
I have 6 girls and occasionally individuals make comments about how many children that I have in a less than complimentary way. For them I reserve the ' I married again after being widowed quite young', I always deliver it with a smile!
People make too many assumptions.

Indeed, I think you deported yourself perfectly - I think my stiff upper lip would have been tempted to split!
Best wishes

Oh my goodness. I would not have been so nice.Good for you!

What an excellent day for you and Sam!

The man behind you just doesn't have a clue.

I love the pic of you and Sam it's so cute!

Wow. What an awesome way to handle a hard situation. I wouldn't have done so well.....

You handled the situation beautifully. Sounds like "father of the year" expects everything in life to go his way. That's too bad really.