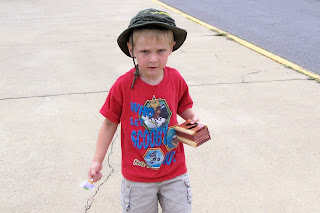 As I have shared some in the past, Sam has some pretty aggressive and violent melt downs. The above picture was the look I received before a huge meltdown on vacation this summer. Shortly after this pic, he threw his items and went running away through a crowd. It happended because I wasn't walking the way he wanted me to walk along the crack in the sidewalk he was following. I couldn't understand how he wanted me to walk, and BOOM! We have aggressive/violent meltdowns a couple times a day, and they can often times last as long as an hour. This past year they have increased in length, aggression and frequency. While having meltdowns is nothing new in the autism world, these meltdowns have been changing in complexity for us. Sam will go from one extreme emotion to another in seconds, and usually with no warning. Most of his incidents are related to communication or frustration on his behalf. While Sam is verbal and uses language, he doesn't always know how to communicate. He can't tell me when he is sick, or his specific needs at times. Sometimes it is a simple word he can't remember to say. Like the other day, I had given him a cup of yogurt for a snack but forgot to give him a spoon. He came up to me and kept saying over and over,

and of course I would respond with "what?"

At that point I had just figured it out, "spoon?"

Too late. "Yettttthhhhhhhhhh" (yes) Sam screamed with agony. "I fordot, NO MORE!" He forGot how to say spoon, now he was mad, so forget it, he wasn't even going to eat.

So, next came the chair, then the plant, then all the picture frames and head ramming. That is his typical order of destruction when in the kitchen area. He quickly goes after the wooden kitchen chairs and throws them backwards onto the wood floor, he rounds the corner and grabs my plant, pulling it by the branch across the floor until the dirt spills, then he proceeds to every picture frame in site and slams them face down, following with his usual head ramming or banging. All of this in a matter of explosive seconds out of nowhere.

So, then you may say this to me, "you know what happens, move things, prevent it, stop him, then consequence him."

That is so much easier to do with a neurotypical child. If it were our oldest that did that, we would, because he would learn the first time he had to clean up the dirt, pick up the chairs, etc...that the behavior was not acceptable. Zach would understand the first time.

With Sam it is different. (Which yes, creates another whole post someday on the challenges of having different rules and expectations for children and siblings of those with special needs. Unfortunately, it could be a book of explainations.)

I won't put away the picture frames. They are pictures of family near and far, and it is an important staple of our family and how we share memories. They will continue to get slammed and broken by Sam, and I will continue to buy cheap wooden ones that are replaceable. The kitchen chairs....well, that would be a pain in the butt to not have those out. So, that leaves the plant, the easiest thing to move. Now that may just be me being lazy!!!! :)

This example of a melt down is actually quite mild for what his are like. He has attempted to hurt himself many times, which self-injurious behavior is also common with our little autistic kiddos, because they get so frustrated and don't know what to do. Sam will actually bang his head into things or sometimes attempt to actually throw himself even down our stairs. He will bite, kick and hit when being restrained (who wouldn't) from hurting himself or others. We have created a safe place for him during these situations in his bedroom. But...our concern has been great over the last several months.

Hence, this past Monday, Sam had a check up. And...we finally started the "autism drug" of Risperdal. I could hug and kiss our pediatrician. We have had 3 days without ANY meltdowns. Two of those days have seen zero beginnings of any tantrums. The first day, we had several start, but I was able to redirect them, which I haven't been able to do for over a year!!!!! I know I shouldn't get too excited yet, but this is HUGE!!!!! I can't wait to see what kind of effect this will have for Sam. He seems a little different too, more receptive, more at ease. I know that there are many people in the autism community, who would not seek the use of medications to change behavior in our kiddos, and I respect that. But, if this helps take some of the frustration that Sam has to encounter everyday away, it will be very worth it. Oh yes, "ch-ch-ch-ch-changes" are in the forcast. Changes that we look forward to.

A Twist of Faith
Sometimes we are afraid to give our lives fully to God. We are afraid, because that would require a change. But, when we do, I can only say that the change is truly for the better.

Jesus said, "If anyone is thirsty, let him come to me and drink. Whoever believes in me, as the Scripture has said, streams of living water will flow from within him" (John 7:37-38)
Posted by mysamiam at 6:57 PM

K.C. takes Risperdal too for headbanging and aggression, it works very very well! Before starting Risperdal he headbanged, headbanged alot but since taking Risperdal it decreased alot. It helps so much:) The only side effect I have seen in K.C. in the past was eating, eating alot and a bit of a runny nose (runny nose is from Risperdal). He did gain weight in the past but keeping him active and going for walks helped with the weight gain and he's thinned out fine. K.C. was a much happier kiddo after a week on Risperdal and somehow I think he knows some way that it helps him because when it's time for him to take the Risperdal he takes it straight away as if he knows it helps and he needs to take it. Does Sam take pill form or liquid? K.C. takes pills and 2 mg twice a day.
"ch-ch-ch-ch-changes" are a good thing and I know Risperdal will be a God send as it has for K.C. Way to go Mom and Sam!

Sam is on the pill form, and our doctor is having us start out very low and go up. We will be at .5 mg a day starting tomorrow. Changes already!!!!

Very curious to know how it goes with the Risperdal---we try to keep the dose as low as possible. (Charlie takes .625 mg.) Our doctor also emphasized that we had to combine the Risperdal with a teaching plan to reduce behaviors. Hope good times continue!

He now sleeps limp instead of tight and sweating a lot. He can sit and eat a meal. He has 1 thought at a time. It didn't take away the headbanging... sorry. And he repeats what he's said in a whisper when he talks and this is better. Unfortunately except for the sleeping... it's all coming back.

It needs to be adjusted. Somewhere in my labels... there is a post on meds.