Answers not needed for Shalom (Journal #56) 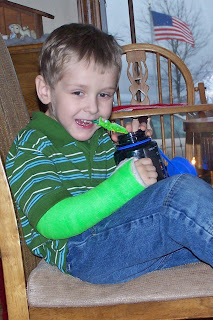 It was just the boys and I this Valentine's as we missed dad, who was out of town on business. So, I had pledged that it was "all boys, all night". No interruptions from the outside world, no doing housework on their time, no "have to" stuff, just me and my boys.

It all started out fine, as Zach had some time to enroll his latest Webkinz that Brent and I gave him for Valentines. He was so excited that he now has 4 of them. He also was trying so hard to show Sam how to set his Webkinz up on the computer, but Sam paid no attention. He just sat on the floor by his brother lining up his legos and blocks. Zach was trying so hard to pull him in, and Sam didn't even flinch, or notice his brothers desperate attempts. I say the evening started out fine, it was peaceful. A shalom sense that we hadn't had for awhile.

So, it was my fault, I broke the silence. After a couple of phone calls (that I already had said I wasn't going to take, but in these cases they were both important family members) I got on the floor and tried to draw both boys in together for play. They started a little, Zach being so patient, and Sam dictating who would touch what and when. I decided to slide back a little and watch it pan out, in hopes of it turning out a little more different than it did yesterday when Zach tried to build forts with him. But no, same ole' thing. Sam insists on everything his way, and Zach desperately wanting time with his brother, concedes, just to have time with him. I am always so impressed with Zach.

As the night wore on, I was debating how to transition Sam to bed. He has been on Clonidine for a year now, of which his larger dose is saved for bedtime to help him sleep. Sam's sleeping history prior to this was his being awake from midnight or 2AM until morning. Ever since Christmas, he has fallen back in this pattern of waking up, except this time it is with very agressive melt downs. Sometimes I think they stem from dreams, other times I don't know.

So, my transition for Sam's bedtime is forming in my head, but Zach also wants my time to listen to him read his Series of Unfortunate Events book.

I don't have time to make a plan, as Sam had already started. Started... what I sometimes call his "full body stim" time (while you won't find this definition under classic stereotypic behaviors of stimming). Sam's stimming usually consists of smelling and sometimes licking objects, and tacticle stims, with the need to rub his hands on other peoples skin. The more vestibular stims are his "full body" ones. Sometimes this is just pacing back and forth while talking, talking, talking (could seriously last hours while he completely retells his most recent movie in story form but with exact word detail), or sometimes he does what we call "head ramming", because it isn't just head banging, as he gets running starts and rams his head into whatever object or person repetedly. The latter is what occured tonight for almost an hour and a half. I could not stop him tonight until he crashed from exhaustion. Deep pressure didn't work, his weighted blanket didn't work, his "soft area" of his room didn't work, the big pillow/bean bag method didn't work. It went on and on and on. He was running all over the house ramming his head.

The fact that he hardly ever feels pain didn't help tonight, as several times I had to stop him from ramming his head into the hard doors, walls and bed frames. He just doesn't seem to care what happens to his little body when he engages in this.

After a full hour and a half of trying to keep him safe, and keeping his brother in a seperate part of the house self entertaining, we were both exhausted. His little body finally collapsed on my legs on the couch. As he instantly fell asleep, I just sat there looking at every little bone in his body, because you really can see them. He gets that from his dad. I was utterly amazed that something wasn't broken from all the thrashing his body took during this episode.

All I can think of when we have these episodes is how can we protect him? How can we keep him safe, and his brother safe when these incidents occur. Tonight, in my attempts to restrain him a couple times to keep him from banging his head on the corner door frame, he bit me. I really don't think he knows he is doing it until well after the fact. But while it is going on, there is some need trying to be fufilled, I just wish I knew what?

My Shalom for the night was gone. Or was it? Maybe Sam needed to have this "head ramming" episode so that he could have peace for himself tonight. Maybe he needed to get this out of his system so he could calm himself to sleep? That I do not know. What I do know is that I still respect his needs, and will never hate what he does, even though it is exhausting. It is this video below, from an autistic person whom I have learned much from over the last year from her blog, that helps me understand. While Amanda is non-verbal, she can definitely communicate. You must watch this video she made last month in response to "Ashley X" . Watch it in its entirety to get the full understanding. Amanda translates towards the end of the video. It has helped me to understand in a much deeper way what stimming does for Sam, why it is so important for him to react to every little part of his environment. Perhaps the most important reason, as Ashley writes, is that we don't need answers for why he does some of his things, we just need to understand. That will give him and us the Shalom we need without an answer.


A Twist of Faith
Shalom doesn't just happen, it requires us to seek it through understanding others and the world.
Seek peace and pursue it! ~ Psalm 34: 14

Actually, I don't use FC in the video at all -- FC is where you have someone helping you type. I only rarely need that help.

ballastexinstenz~ Thanks so much. I made the correction. Beautiful video as I had commented to you.

Curious to know if Sam receives OT at all? Conor's "ramming" used to be much more significant until he started receiving private OT and the OT gave me ideas to help his body "feel" throughout the day and/or when he starts to seek out that proprioceptive input. Just a thought?

Melissa,
Thanks for thought. I wish we still did have OT. Sam went for about a year and a half, until our stupid insurance decided it should have never paid for the time that it did. Seems they don't think developmental delays should be covered, and especially any type of sensory therapy. During that time, we did do brushing therapy, auditory therapy, a joint compression therapy, and many more. Usually someone laying on him or intense wrestling will help, but last night nothing seemed to phase the little stinker. I don't think it was a full moon? :)

What a powerful video!! Wow, it moved me to tears. I feel that Amanda and all autistic people are so misunderstood and try as I may I cannot imagine how hard that must be. Thank you for sharing this video it has definitely left a big impression on me.
Griffin used to ram things and people with his head as well and then he just stopped and hasn't done it in a long time. Don't know why he stopped but I am hoping that he never does it again because it hurts not only me but it is dangerous to him too. So, I feel for you and all that you are going through in trying to help him. It seemed that when he was doing it that nothing helped him either, he was even going through OT and it didn't seem to make a difference. I tried everything and he just kept doing it. Hang in there, maybe just maybe he will stop just like Griffin did...wouldn't that be nice?

Oh my your pre bedtimes sound like mine. Sam and KC are so much alike it is amazing to me! K.C. will keep going and going to the very last second to stay awake. Sometimes he is in a full sweat when he finally falls asleep.

I saw the video of Amanda as well, amazing young lady.

Sam is so cute in the photo! He has the mischievous grin, so cute!