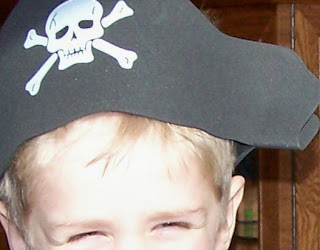 Saturday Sam had his "friend party" for his 5th birthday, even though it is not until Friday. Sam had clear direction on what he wanted for his party.
"C tan tum"
" D tan tum"
"E tan tum" (as he listed who would come)
"Dat's all"
"Nobotty ting happy birty" (and absolutely NO One will sing happy birthday, he hates that, he always says it hurts his ears).
"We hab piwut sip on da beat too. Hab to hab a beat." He thinks we have to have the party on a beach where there is a shipwrecked pirate ship. Hmmmm...that one we will need to modify.

Simple enough, we can do everything else! Two of the three have autism also, and are in his class at school. One is a little 3 year old neurotypical friend from church. I will call her Grace. Because, that is what she provided all day...Grace. Only one of his autistic friends was able to come. It was a perfect size. Three counting Sam. There is that little rule of thumb you know, that you should only invite one child per year. So at this stage of the game, 5 friends might be appropriate. We did not know all of the needs of Sam's autistic friends, so we decided to keep it low key and at our house and stick to what was best for Sam and everyone.

The theme was a pirate theme, one of Sam's interests of late. We went on a treasure hunt all over the house to find parts of our costume, the hat, the earing, the eye patch, the parascope, and the last thing was the treasure itself. We stuck with Sam's wishes to not sing happy birthday. We had a ratio of 3 adults to 3 kids. Sam had 3 or 4 melt downs that included screaming and throwing things. Brent gently took him to another room each time, and I continued on the treasure hunt with the other kids. It made me kind of sad that he was missing his own party at times. He would always come back and join us when ready, and the other two didn't even know he was gone.

After the party, his school friend went home, but "Grace" the 3 year old friend from church stayed to visit with her mom and us. Sam had quickly set up his fort. He takes his toys and lines them up and builds them to enclose him, along with a door. He has obsessed about doors since 2. After he creates this little fort of toys. He sits in the middle of it and won't let anyone come near him. He does this all day with his brother usually, and at church as well.

Here we go again. Poor Grace just wanted to come in and play with Sam, but no. She was so gracious. She kept coming over to his door smiling. "Sam can I come in?" "Sam can you play with me?" He would growl "NO!" She would smile, say okay and go play with something else for awhile. She would entertain herself by getting toys from the toyroom and bringing them out to where Sam was. She would parallel play beside him until her next attempt. However, when she wasn't looking, Sam would snatch her toys she brought in and add it to his walls, as if to build them up higher. If she found out before I could get to Sam to give them back, again she would graciously smile and say "It's okay Sam, you can have it." Wow! Gracious for a 3 year old. She just wanted to be with Sam so bad, she did not care. Times like this, I wish he were more neurotypical, to experience the joy of playing with a friend and sharing that love. What's so wrong with that?

I also get a little weepy, when I think back to all of the friend parties we have had for his big brother. We could plan them most anywhere with anything, animal parties at the Nature center, Chuck E Cheese, bowling...Sam very much so wants those things too. He expresses it, but it is too overwhelming for him at times. When he had his melt downs on Saturday, I kept flashing back to Zach's 5 year old space party and his friends. Zach laughing and being the center of attention and loving it. Zach wanting to play with EVERYONE. I wanted Sam to feel that too. What's so wrong with that?

Yes, Brent and I make accomodations for Sam to help him and do what's best for him. We will always do that. But as much as we love him and do that for him, we too are human, and I believe it is okay if we wish and wonder what it would be like if he didn't have Autism. We are not dehumanizing him in anyway by doing so, it is just us thinking. If people don't ever question the opposite of who they are, they don't ever appreciate or have a deeper understanding of who they really are. What's so wrong with that?

A Twist of Faith
God made us all human. And for that I am forever grateful!
"All have sinned and fall short of the glory of God" (Romans 3:23)
Posted by mysamiam at 12:41 AM

happy birthday to sam!!!! sounds like a wonderful party. i know what you mean about wishing our boys could feel less stressed at their own party. of course we want them to have the fun and, well, grace, of easier connections.

by the way, do you think we could rent grace for the afternoon?

There's nothing wrong with that. I wish and feel these things too. Happy Birthday to Sam. My Sam (and his brother) are just two, but I know we'll have similar celebrations and thoughts about the what ifs, because we ARE human. Thank goodness for grace, though ;)

I completely understand where you're coming from. Sometimes I actually forget that Conor has autism... until I see him with same-aged children. Each time that happens, I am jolted back into reality. Then, I have to take a deep breath, regroup and push all of that out of my head. It is then that I remind myself to praise God that Conor is who he is, completely unique and unlike anyone else. Have faith, sister friend. Our God knows what he's doing, even when we don't have a clue!! :-)