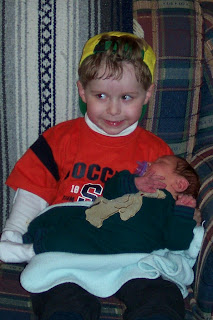 As our youngest little guy turns 5 next week, I have been doing a lot of reflecting lately. Been doing that "hind sight is 20/20 stuff." Remembering the symptoms that Sam displayed, that we didn't understand at the time as being Autism.

Looking back we remember his lack of speech, and how much we spoke for him. He could not speak to us in a way we could understand. Brent reminded me of how he would not really point to things he needed but he would lead us by taking our hand, well past the appropriate age to do so. He wouldn't always respond when we would call him, and often times acted like he didn't care. As I have shared many other times, he did not "need" to be held, but I needed to hold him. He didn't like that I would pick him up when he was content to be alone. He made that very clear by his screams. I remember thinking that something must be wrong with me. He must not have "bonded" with me. I was on a mission to make him bond with me. I really couldn't share these concerns with anyone at the time. Would Brent think I was not being a mother to him? Would my girlfriends think I was ineffective if I told them I didn't think Sam was bonding with me? What baby doesn't connect and bond with a mother.
How embarrassing to even discuss with anyone, not even a pediatrician?

Sometimes when Sam would wake up at night, I would just stay awake holding him, even after he was done with his cry or feeding. While awake he would arch his back as if to pull away from me. Sometimes I would think it was the bottle causing him to have gas or something. I would watch him though. He wanted away. I remember one night, when he was 1, and more mobile, but not even close to walking, that he awoke. He screamed for almost an hour. Nothing would soothe him. I finally just laid him on the middle of the floor on nothing. He rolled over and sat himself up. He looked at me while wiping a tear, and literally took a deep breath. As if it was a sigh of relief that I finally put him down. I remember the light bulb going off. "He doesn't want me to hold him." He doesn't want held.

I continued with Sam, what I called my own "holding therapy". The one place where "holding therapy" was effective (but not to my benefit) was when I would drop him off at childcare. For the 3 years he was in childcare, I dreaded our morning routine. Perhaps I was too accustomed to his big brother who never had adjustment or transition issues. I could always drop off his brother at childcare, give him a kiss and away to school to teach I could go. Sam would start having anxiety as soon as we pulled in the parking lot. He would become stiff in his carseat. He refused to walk in. Once in the room, he would want to be "held", and he would cling to me for dear life and scream at the top of his lungs as his caregivers would gently remove him from me and continue to hold him. We tried every transition, every soothing toy, quick departures, come early and stay longer departures. It was exhausting. His teacher would call me at school each morning, about an hour later, to tell me he had finally calmed down. She was always worried that the picture of him I would have in my head, would be his face full of fear of being left there. After I would leave each day, he found solitude under an art table, where he would rarely come out, except to go outside for recess.

A Twist of Faith
My baby turns 5 next week, and we have the faith to know that he will not only be held by us but in God's arms forever. Below is a video of one of my favorite Christian song's by Natalie Grant. To know His faith in us, and to do His work and love is to be held by Him.

Add to My Profile | More Videos
Posted by mysamiam at 1:28 AM