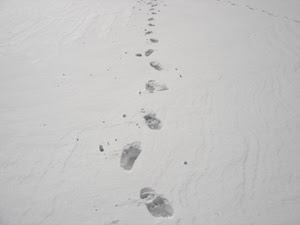 The bus had just dropped Sam off from his LEAP Program at noon as usual. Instead of darting off to the front door he ran to the gate to go into the backyard. With a fresh 4 inches of snow, Sam was back at it. Back to living outside (which he would seriously do). In the summer he digs in his sandbox all day, and in the winter he digs in the snow.
"tay mom, tay mom, tay mom...." he kept saying, as I stood at the entrance of the backyard, where Sam was already running all over. He wanted me to stay where I was and not enter his domain. I watched him intently for awhile. He methodically was making something in the snow with his footprints, what... I did not know yet. I let him continue for awhile, and then remembered that his pancakes were getting cold on the table, and that we also had therapy that we needed to go to.

I continued to watch his serious little eyes as he scampered with purpose making footprints. I could tell that I should not walk into the yard to get him, as it would upset him and the patterns he was making. Finally, after much coaxing, and the need to get to speech therapy he stopped in his tracks, looking at me like he might run, but he wasn't sure. I kept thinking that I had to stay at the gate, in case he did dart, as he frequently runs away and straight to the street.

As I stood waiting to see what he would do next, he calmly said, "tay mom, tay mom, I tum, I tum." With relief, I knew he would come and he meant it. However, I did not plan that he would not allow himself to just walk straight to the gate. He started retracing every step he had made the last ten minutes, making certain not to step on any untouched snow. Of course I did not notice that at first, so I started coming toward him, to hold his hand and make sure he went into the house with me.

Bad idea. I made steps in untouched snow. He only wanted his steps, his creation, and his pattern to be revealed to whoever would see it. A meltdown began that continued for some time. If only I would have had a little more patience to allow him to retrace his steps, as he wanted to walk it alone in his own time. We all learn. We learn what battles to choose and which things to let go. After this meltdown, I should have let it go. After a few more snowfalls since this incident, only Sam's footprints are allowed in the backyard, and the rest of us have learned to have snow fun in the front yard. I am thankful for the patience and grace his brother has allowed with this. Thank you God!

A Twist of Faith
Footprints poem:
One night a man had a dream.
He dreamed he was walking along the beach with the LORD.
Across the sky flashed scenes from his life.
For each scene, he noticed two sets of footprints in the sand: one belonging to him, and the other to the LORD.
When the last scene of his life flashed before him, he looked back at the footprints in the sand.
He noticed that many times along the path of his life there was only one set of footprints.
He also noticed that it happened at the very lowest and saddest times in his life.
This really bothered him and he questioned the LORD about it:
"LORD, you said that once I decided to follow you, you'd walk with me all the way.
But I have noticed that during the most troublesome times in my life, there is only one set of footprints.
I don't understand why when I needed you most you would leave me."
The LORD replied: "My son, my precious child, I love you and I would never leave you.
During your times of trial and suffering, when you see only one set of footprints, it was then that I carried you."
Posted by mysamiam at 9:44 PM

K.C. and Sam sound so much alike! I am amazed! K.C. is like Sam when it comes to lines or something he's making in the form of a very long line, God Forbid it be moved or touched - talk about angry! Big Brother has learned to kinda leave K.C. be when he's in the liner upper mode.

yay for snow! we've had only a TINY dusting so far. how wonderful that big brother is so patient and understanding with sam! i wonder, too, about taking a picture of sam's pattern in the snow? would he 'get' that? then, it could be captured for ever and walking in the backyard would be okay? not that you are in need of a solution. after all, you have the front yard!

fluffy has had similar concerns about his 'pattern's being disrupted, often they are things made with string or tape.

good thing there is a front yard and that you found a solution. I miss the snow of Alaska, Griffin really loved to play in it, but I don't miss the frigid temps.