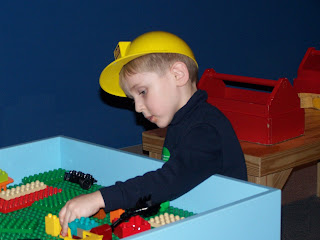 ....as David Bowie sang, "Ch-Ch-Ch-Ch-Changes...." I hope are coming our way. We have made some changes with Sam this week.... (This was the beginning of my post on February 28)

Just wanting to do an update since we have started Risperdal. Have received lots of e-mails from those of you who have had experience with it, and we want to thank you all for them.

At this point, we are still in the honeymoon stage. Sam started it a month ago next week. We have our follow-up appointment with our pediatrician to see how things are going next Friday.

Dosing:
Sam is on .5 mg a day in tablet form. We have the option of increasing to 2 tablets a day for 1.0 mg. We started out with low dosing, increasing every 3-5 days to where we are. We have been at this level for a full 2 weeks. If things change, we will then increase to 1.0 mg a day.

The honeymoon:
We have been "amazed" at the difference seen in Sam. We are pinching ourselves and almost trying to be a little apprehensive, so that we aren't too disappointed if the honeymoon ends. The two behaviors we wanted it to address have worked at this point (knock on wood).

Behavior 1~ When he is having melt downs (was averaging 2 major ones a day that would and could last at least an hour each time), he has become very violent, and quickly hurts anyone and anything in his way.
Ch-Ch-Ch-Changes~ We have had only 2 items thrown in a month and nobody else hurt in that time (big brother, usually the target, is very grateful).

Behavior 2~ During his melt downs, he has become self injurous (not uncommon among autistic children), but to the point that they were increasing in degree. They would range from head ramming, hitting self, to throwing himself down the stairs.
Ch-Ch-Ch-Changes~ He has not hurt himself once in a month.

It was incredible in church on Sunday to hear people telling me that they were noticing something different about Sam. He seemed happier they said. They also commented that it appeared as though he were interacting more too. I speculate that he isn't feeling the anxiety and frustration that would lead to the melt downs. Hence, we have a little boy feeling more comfortable expressing himself with others, even if they don't understand him at first and even if he isn't sure how to.

It is not that this is "the miracle drug", and I know medications are not the route for everyone...but for us right now, we are thankful for the Ch-Ch-Ch-Changes. We continue with our other therapies as well, but this has been a change we have waited for.

A Twist of Faith
Just as autism is treated in many forms, behaviorally to medically, there is not just one tride and true method that provides therapy and treatment for this disease. Each child with autism has a variety of symptoms and degrees of each. The point is that there are many ways to work with the whole child.

Faith is the same. There is not just one way that we seek God and worship him. There are many. What is important is that we intentionally seek him out in all areas, including daily prayer, worship and service. We have to be many things to him, not just one mode.

Medications aren't our only source of work with Sam, and prayer, worship, or service can't be the only source of work for God. It must be many combinations in all those areas, and in many ways, that is in constant service. For one to say "I pray", that is good enough, is never good enough (that is just my personal belief). We should always have Christ as our focus in all that we do.

We know that all things work together for good for those who love God, who are called according to his purpose.

How wonderful that it seems to be working so well for Sam! Conor's meltdowns usually just entail him becoming a crying, screaming, limp mess on the floor. However, if he gets overstimulated he begins crashing into the kids at church and hugging all of the girls heads & pulling their hair (there is something about the feel of long hair that is calming to him -- he asks me for "hair hugs"). Church has to be the hardest because you know that your fellow Christians are trying so hard to give mercy and grace, and you just want it to be a "good" day at church for your child. :-)
God is good ALL the time. We have to remember that always!

found your blog through the drama at This Mom's and thought i would give it a read.

i am a Special Ed teacher and i specialize in ASD. i love to read the personal stories of parents and their kids! i'll be back!

Risperdal helped Buddy Boy to deal with things over the last two years. We are now trying a period without it (just finished slowly weaning him) to see how it goes. So far so good.

I was reluctant to use meds at first (and I'm a doctor!) but have come to view them as sometimes necessary.

But just 'cause Sam may need them now, doesn't mean he'll need them forever. As kids mature they gain more ability to internally regulate their reactions, and that applies to our kids, too.

Love your blog. I'm putting it on my list to visit on a regular basis.

So glad that things are going so well and that the meds are so helpful. Clonidine has been the drug that has helped Griffin so much (with sleep issues) and getting sleep has made some major changes for him........and me .