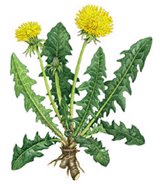 "Dandy"lion time that is! Sam's eyes are always looking. He is constantly going, constantly seeking the details in his world. We enjoy watching and waiting to see what is next.

When I speak in terms of next, I mean, what will his next fixation be? What will be the thing that sticks in his mind obsessively the next couple of months? I remember all too well all of the diagnostic tools and assessment questions when Sam was being evaluated. I remember the questions about odd play or lining up toys, or overly obsessing over an object. I knew what those questions were looking for in terms of answers, but I didn't want to give it to them in a way. For Brent and I knew that what we would say, would further lead to the diagnosis which I, personally, had always feared. I curtailed my answers somewhat, and I actually remember not telling the full truth on his educational assessment because I did not want him to have Autism. I wonder how many criteria he would have met if I had been totally honest.

But here, this is why I did not want to tell the whole truth...I felt like some of those questions made him seem like he was completely thoughtless. That lining up toys in bizarre fashion had no meaning. That doing the same thing over and over again was absurd. But it was th 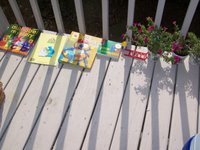 e opposite for me in my understanding of Sam. I always felt, and continue to feel, that he always has a purpose or an outcome that he wants when he fixates on something.

If it is lining up objects, there always appeared to be a reason. You could just look at his little face thinking so hard and know he had a purpose. His little eyes squinting. Crawling on his hands and knees to get floor level for a better look at what he had done. Laying on his tummy, holding his head up with his hands, staring endlessly at what he had just created. He was proud! Not thoughtless. He was thinking about what more he could add on to it. Not thoughtless. Above picture shows how he took all of his books and my potted plants and lined them all around the perimeter of the patio one day last May. The picture below is him ,over a year ago, creating inside. 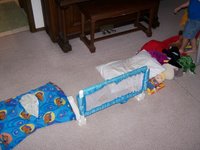 For Brent and I, the most amazing thing is his memory of what he has created. We call them "shrines". Sometimes we have to leave them for days. He screams with great pain if anyone even touches his creations. Poor Zach can't come within feet without a shriek from Sam. Zach is seriously, the most patient and loving brother in the world.

Perhaps what is most intriguing about these creations, is that they contain many objects, toys, and "latest fixations". Many times there are too many objects to count. If he is out of the room, and you move an object an inch, and one that isn't even real visual, he will notice immediately. He memorizes every position and angle that he has arranged everything. He has a purpose. Sometimes Brent and I think he is creating some type of map or layout. We think he will be a famous architect some day.

In his "shrines" or lines, or whatever they are...they always look like they have a purpose in his mind. The challenge is the "fixation" of the day, month, week, or year. What is the object or idea that he will incorporate into everything he does? Well...for the last 2 weeks and still holding strong...it is the dandelion. Walking anywhere near those lovely weeds is virtually impossible, as Sam believes he needs to snatch every single one up and bring it home.

This has been his latest ritual:

3-carry baggy with me everywhere...school...church...bedtime...mealtime

5-when they look dead... cry, scream, yell and throw them out of the baggie (along with all the grass I have collected) on the floor, scattered as much as possible

We just love his little mind so much. While sometimes it is frustrating when we don't understand, we always know he has a purpose for everything he does. This weeks issue of Time helps us to reaffirm what's in his beautiful brain...

...of why he has his little stims

...of why his routines and rituals are important for him to feel safe

...of why he says or doesn't say things

...of why the way an autistics brain works is so amazing

...of why we are going down the path of acceptance that we have chosen

you know what's cool? Our son Solenbum does the same thing, and when I was downloading the digi camera, I found a pix my wife had snapped of a wonderful "shrine" that Sol had created out of cars-- from a big toy truck down to a teeny lil' matchbox car. She hadn't read your post and didn't snap it because of MY blog; she loved the careful symmetry that he was busy creating, so methodical and precise. I think I'm gonna steal your idea for this post and do one of my own!!

Gabe loves to line up puzzles and then walk on them. He doesn't get too upset if you move them. Gabe is more of a "carrier". He loves to carry things around like balls, cars, plastic fish and polly pocket clothing. He gets a bit unnerved when you take the things out of his hands. I sometimes have to get it down to just one thing in one hand because he just can't function.

Big Orange-
Go for it and copy the blog. The more we share with the world how interesting the minds of our little ones are, the more they will understand and accept. Look forward to seeing your patterns. I was going to put a picture up similar to your description on how Sam symetrically layed out a pattern of leggo and cars with matching colors and shapes in the pattern.

Mom to Mr. Handsome-
Best blessings (I like that word better than luck) with your "carrier". It's always interesting to see how their interests change in things. :)

Actually, I DID blog about it and liberally mentioned your name (ain't nuthin' like a lil' cross-post traffic!!) In MY post I wondered mostly about what's going on in there (the child brain), and wondered if perhaps we have lil' perfessers who are testing out various theories on the world. Feel free to check it out; I'd like to know your thoughts on it.

Hi there!
My son is a liner upper too! He loves to line his little cars up:) Your son is gorgeous:) Awesome blog Mom:)