Wondering why...I haven't been able to put to words what I have been pondering about Sam the last few weeks? Could it be because we have seen dramatic highs and challenges ( I don't want to say lows, okay, I just did didn't I?)? The highs have been awesome. His big brother had a sleep over, consisting of 8 very active 9 year olds on his brother's birthday. I was completely stressed about Sam being overstimulated by having all of the excitement. Brent was on "Sam duty" throughout the event. On the agenda for the evening was bowling at the awesome Brunswick Zone. Our last experience trying to do a family bowling night ended up with Sam screaming, running around and hiding under chairs, of which saw the two of us driving around in the van for the next hour while Zach and Brent enjoyed the rest of their game. Needless to say, to our surprise, Sam was the most manageable boy there! He was awesome, even with all the noise, even with the 48 lanes, lazer tag center, arcade, diner, and sports screens! It truly was a tearful, joyful time for Brent and I to witness. Perhaps, the greatest though, was the way Zach and his friends handled Sam. Even though we heard some of the boys saying things like "I don't understand anything Zach's brother says" or "Why does he make sounds like that?", the culminating moment was at the alley. The boys shared two lanes. Five on one lane and four on the other. Sam was a part of one of those. Every time it was Sam's turn, all the boys in his lane would get his bowling ramp, help line it up for him, help carry his ball, then they would all stand beside him to encourage him. They would cheer him and high five him no matter what he did! Sam was loving life, smiles were huge, the high was unreal! 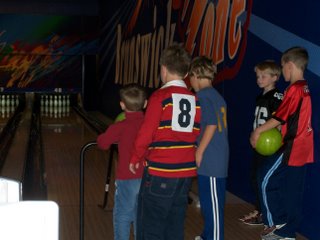 Wondering why...Sam's back to lining all of his toys up. Felt like we had made progress seeing more interaction and play with them instead of his "arranging and lining up" and then walking away allowing no one to come near or touch. Or had we made progress, or was it just that we are hardly ever inside from June-Sept before we have to be in winter? I started really thinking about his play. Yes, we haven't really been playing inside for a long time. We've been out back in the sandbox, where Sam will play for hours if left to do so. So I got a little sad this week, when he kept creating the same scenario with his barn stuff. If I cleaned it up at night, he would wake up screaming that "you brote, you brote it!" He would then proceed to line it up exactly as it was the entire day before. No one can touch it all day! What I thought was progress wasn't. Or do we really need progress in this area? I agree that he has got to allow us to interact with him when I am tyring to lay on the floor and play, I agree that he has to learn to let people play with the toys the way we want to, not on his terms, but isn't it still okay for him to do his arranging/lining up for whatever security reason he needs? Lining up organizes his world. We have taken all toys out of his bedroom this last year, because he would just line everything along the walls of his room all night if we didn't. Even after they are lined up, he still keeps adjusting them, making the objects face directly the same way or whatever. All that remains in his room are a couple of 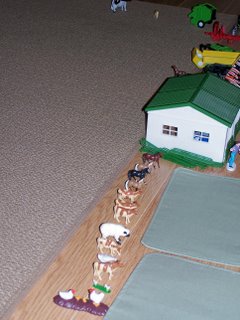 his favorite snuggly animals, his tub of "sensory" kidney beans ($100 worth), and his weighted blanket. So, this week I caved. I allowed him to bring in a few toys at bedtime to line up along the wall. It seemed to comfort him. I put the timer on telling him how long he had, and you know what he said back to me? "I dus need to line dem mommy, den done." (I just need to line them up mommy, then I am done)! I wonder if it is okay, but I don't need to wonder if it makes him feel better, it does!

Just a couple of things I have been wondering about....of which there was so much even more I am still wondering about, and will share in later posts.

Just always thinking, I am...and wondering why?
Posted by mysamiam at 11:45 PM

K.C. is a liner upper too! He'll line up just about anything including our shoes! The lines have to be exact and God forbid we touch whatever he's lined up, lol.
For K.C. I think it's a stress reliever or so it seems.
Sam and K.C. sound so much alike. How awesome is that!
I love the photo of the boys. What an awesome night! I got all teary eyed reading your post.