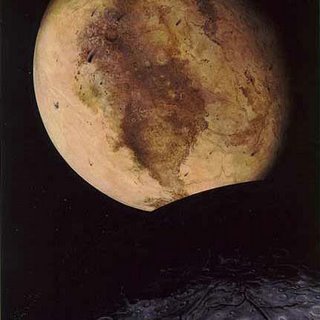 Just as I start to brag about Sam sleeping so much better to family and friends, it is then that my blessing is toppled. Last night was a night! Perhaps Sam was star g

azing and already preparing for the International Astonomical Union's morning announcement denouncing Pluto. He does sense things before they happen I believe!! :) So, last night I decide to do a Walmart run since Brent was leaving the next day for a business trip to Kansas City (and I am not up to taking Sam shopping, considering the past week). I got home around 1:30am, and Brent and I talk to the wee hours.

Just as our eyes grow heavy, we hear a cry from Sam's room. He wet the bed. We hurry down, comfort him, clean him up. At that point, we decided to part the waters to get to bed sooner. Brent would snuggle in with Zach in his bed and I would take Sam to ours. It was another one of those nights. Sam did not go back to sleep until around 5:30, of which the time we needed to get Brent out of bed (who really hadn't slept). So both of us got no sleep. Unfortunately for Brent, he had to beat rush hour downtown to an 8am meeting, then fly off to Kansas City for the next couple days. I hope he gets zzzzzzz on the plane.

So the morning was sluggish. The boys and I were snuggling in Zach's bed. I was half conscious, but enjoying them looking at a toy catalogue together. It was a peaceful calm time for them and Zach was being such a good big brother. Sam would say to Zach, "what dat?" and Zach would gently explain to Sam what the toy was and what it did. In the middle of the boys sharing together, the phone rang.

Brent had called and demanded to speak to Zach right away. I could hear the conversation, and Brent was excited and telling Zach about the morning news and the reduction of supposed 10 planets now down to 8. Zach hung up the phone super excited, retelling me and Sam at 100 miles per hour.

Zach would explain again in his scientific voice.

Zach, "Sam, Buzz Lightyear is not a planet, he is a Disney Character."

Zach, "Sam, Buzz Lightyear is NOT a planet, he goes to planets"

Zach, "Sam, Buzz Lightyear is that character all over your bedroom, he is NOT a planet!"

So much for the peaceful morning watching the two share in conversation about toys. The teridactle scream began and lasted a half hour. Sam used few words the rest of the morning. Actually the rest of the day. I do think some of it may have had to do with the barometric pressure and the severe storms and tornados that ripped through our portion of the state. Who knows?

I feel for both sides. I know how frustrating it is explaining things to Sam, and I can imagine how frustrating it is for Sam to not get us to understand. But, I also am learning to not always mediate. Zach has to learn patience and learn to try to understand what Sam is saying without me interpreting, and Sam has to learn to communicate without my translations as well. While it can be frustrating, I am just fine learning about a new planet named Buzz Lightyear!
Posted by mysamiam at 1:09 AM

My turn to console YOU! Ugh. Sleepless nights!! Conor's favorite thing to do lately is to awaken us in the middle of the night (somewhere around 3ish) by loudly kicking his door, over and over and over. I think I'm running out of heartbeats. Hang in there. We'll sleep when we're dead?...

Buzz Lightyear rocks!
Just finished doing my 4 yr olds room in the Buzz theme - he is obsessed with all things Buzz (and is autistic too - did I mention that?)
I love it because it's never been so easy to get this boy to bed - until now. Now he LOVES going to sleep in the Buzz Lightyear room. In fact, I have a hard time keeping my 5 yr old in his own room. Buzz deserves to be a new planet! A very nice calm put-your-child-to-sleep planet.