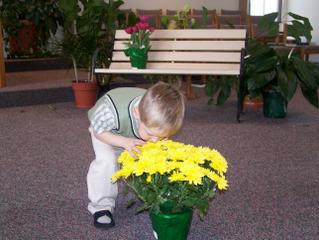 Since Autism is neurological, many children are impacted with huge sensory issues. Sam has many of those. He is very sensitive to the way things smell, to the texture of the clothing he decides to wear, to pain (not feeling any), to sight (doesn't like sunny places always), the list could actually go on.

One of his sensory "issues" which I find humor with, is his smelling. There are times he won't walk into a room in our house because he says it is "too melly mom". Now, it really could be too smelly, depending on the last time I cleaned that room, or the last time his brother found the dirty clothes for his socks, but, many times he smells little things I hardly notice.

Every time I make him try a new food he has not tried, he has to study it, look at it, and then he puts his nose right on it to smell it. He might be playing with toys (like new plastic ones), and he will smell it for minutes on end and sometimes end up licking it. He is so silly doing it sometimes, that it just makes me chuckle. He seriously looks like and sounds like a sniffing dog. He will be down on all fours, sniffing the toy on the ground.

Last week, we did a Kmart run together. While I always think Kmart has an automotive odor to it, :), Sam was definitely onto the smell scene. We walked by handbags first, as we were looking for a new backpack for his brother for school (go figure, the zipper broke on his old one the first day of school, that's what I get for buying cheap). When passing by some pleather purses, he grabbed my hand to stop me from continuing our Martha Stewart adventure. He didn't say anything, but as I turned around, he was hunched over a purse, sniffing the strap up one side and down the other.

Then we proceed to the automotive department (so I could check my senses and see why I think Kmart always smells like that...no really...had to get washer fluid). As I round a corner with Sam following me, I turn to see him stopped at an end cap display of Turtle Wax, with his nose virtually sniffing all over the plastic case of it. As I get ready to pipe in and tell him "let's go", it was too late. Before my mouth could utter a word, he licks it. Of course my first reaction was to yell at the poor kid. I said "Sam, what did you lick that for?", and he innocently replies "it melled". Needless to say, I won't be waxing my car anytime soon.

Yesterday we enjoyed some errands together and ended up at Target. We were cruising the health care section getting new toothpaste, but you could smell "make up" type odors. He immediately started saying "It melly in here, go mom!" I couldn't realistically go when he wanted as I couldn't find everything I needed. Of course within seconds it turned into screaming...a blood curling scream. While people always look and give that "get you child under control" stare, I have learned, or we have learned I should say, that unfortunately, nothing soothes his melt downs. They just have to run their course. Now, I didn't obviously stick around that department, but I did need to tackle other items in the store as quickly as I could and get out of there.

If there is one thing I am learning about all of this, is that how strong I have become at ignoring others. I used to always worry about what other people were thinking, but you can't anymore, I have a beautiful boy with special needs. And, I can honestly say that I don't care what they think.

As for me and my boy, if he says "it melly in here, go mom!" I am probably going to go a little faster next time!
Posted by mysamiam at 12:49 AM